Our next seminar will be held on wednesday the 11th of May, at 14h00 ECT, at the Pierre et Marie Curie campus of Sorbonne Université, in the SCAI seminar room lockated on the first floor of the Esclangon building

Mesoscale Eddies are oceanic vortices with a typical radius of the order of 20–80 km. They live for days, months or even years, trapping and transporting heat, salt, pollutants, and various biogeochemical components from their regions of formation to remote areas. Eddies have a primordial role in the oceanic circulation modifying the surface currents as well as the mixed layer depth of the ocean. Thus, eddy detection and tracking is an emergent thematic of operational oceanography with advances in the last 10 years.

Eddies can be tracked on altimetry-derrived Sea Surface Height (SSH) and geostrophic velocity currents through standard detection methods. However the strong spatio-temporal interpolation of the altimetric observations raises uncertainty of detection. Satellite imagery, on the visible and infrared spectrum, contains signatures of eddies, which despite their fine-scale resolution are too complex to be processed by geometric based methods.

Machine Learning/Computer Vision methods have proved very prominent in exploiting complex remote sensing information, such as the eddy signatures on satellite imagery. We build a Convolutional Neural Network which can accurately detect the position, shape and form of mesoscale eddies in satellite Sea Surface Temperature (SST) images. Our CNN only misses 3% of coherent structures, with more than 20km radius and a clear signature on the Sea Surface Temperature, compared with a 34% miss rate of standard eddy detection methods on altimetric maps. Additionally, while standard altimetric detection has a 10% false positive rate (“ghost eddies”) the neural network detects less than 1% of ghosts.

By combining detections on data stemming from different sensors (here SSH & SST) we do also provide a set of reference nowcast (real-time) detections with almost zero uncertainty. We focus here on an application of validation of operational numerical oceanographic models in the Mediterranean Sea through the comparison of their outputs with the reference detections, allowing to quantify their nowcast error and pick-and-choose between different numerical on a certain region.

Evangelos Moschos is a PhD student at the Laboratoire de Météorologie Dynamique (LMD-IPSL), Ecole Polytechnique, France. After an engineering diploma in the Athens Polytechnic, he developed a keen interest in bridging computer vision methods with earth observation and operational oceanography. Co-founder of Amphitrite, a start-up harnessing AI to provide maritime stakeholders with real-time, reliable oceanic data.

Our next seminar will be held on wednesday the 11th of May, at 14h00 ECT, at the Pierre et Marie Curie campus of Sorbonne Université, in the SCAI seminar room lockated on the first floor of the Esclangon building.

You can ask questions during and after the talk in the slack channel: https://tinyurl.com/AI4CLIMATESLACK 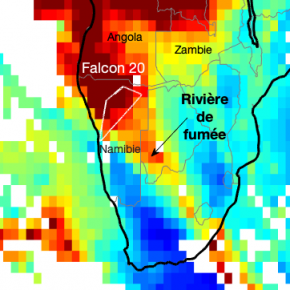