Satellite observations before and during the strong reduction in air traffic triggered by the COVID-19 pandemic confirm a warming influence of aviation-induced cirrus clouds.

Scientists from Leipzig University, Imperial College London, and the Institut Pierre-Simon Laplace in Paris, investigated the amount of thin, high-altitude clouds (cirrus) in regions with large air traffic reduction in spring 2020 compared to previous years. Johannes Quaas, lead author of the study, says “The COVID-19 pandemic provided an unprecedented opportunity to contrast cloudiness in air corridors under very different levels of air traffic. We found a 9% reduction in cirrus cover and a 2% reduction in cirrus opacity in those regions.”

The study provides clear evidence that contrails formed by aircraft leads to additional cirrus. It relies on two major methodological improvements. Edward Gryspeerdt explains that “we could use satellite observations to measure the change in cirrus over the lockdown period and relate this to reconstructed flight patterns so we know how large the reduction in aircraft traffic was”. Robert Vautard further highlights that “using a method called ‘circulation analogues’ we compared meteorological conditions from the March-April-May 2020 period to similar ones in previous years, which helped to extract a clear signature of air traffic in cloud observations”.

The study could quantify the radiative impact of contrail-induced cirrus from observations. Olivier Boucher indicates that “this new observational estimate is similar to, though a little smaller than, previous estimates relying solely on atmospheric models. It will provide a benchmark against which future models can be compared”. Avoiding contrail formation by rerouting some flights is a possible measure to reduce the climate impact of aviation. 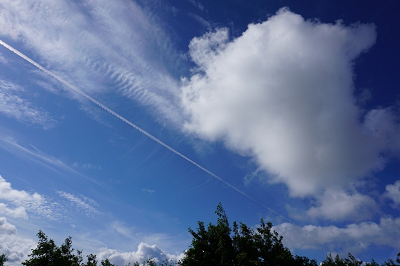 Aircraft form line-shaped contrails, called “cirrus homogenitus” in the 2017 edition of the World Meteorological Organization’s cloud atlas. Contrails can spread out to form aviation-induced cirrus. The COVID-19 air traffic shutdown has offered a unique opportunity to quantify how large this effect is. @ Johannes Quaas

The Law, driver of environmental transition