Clouds: unravelling the mysteries of the atmospheric water cycle

The water cycle is often envisioned through rains, surface run-off and infiltration in water tables. Yet, the atmospheric component is a major step not to be left aside. Cloud formation and types of clouds are key parameters in the atmospheric water cycle and in its evolution due to climate change. Helene Brogniez, researcher at LATMOS-IPSL and teacher at Université de Versailles St-Quentin, discusses atmospheric variations associated with the ocean surface temperature in the tropics.

The water cycle combines above the continents a hydrological branch and an atmospheric one. The latter takes into account the transport and duration of stay of water, mostly in the form of vapour. Rainfall on surfaces can be the result of cloud formation due to atmospheric movements having a cooling effect. Whatever its form, water is essential to understand the climate system as it strongly interacts with solar and infrared radiation. Clouds are also a real challenge to scientists. Various types of clouds present very different characteristics concerning the quantity of water they can contain and their impact on the radiative budget. It also affects interactions with the surface and quantities of rainfall. Lowering uncertainties concerning cloud formation is a major issue in understanding the evolutions of the water cycle and the Earth’s radiative budget. Besides, the impact of climate change on cloud formation is not easy to determine.

Since 2006 scientists can study fine vertical cloud structures with active sensor instruments such as the lidar CALIPSO or the radar CloudSat. But this remain too recent to get tendencies of their evolutions on scales truly representative of the changes undergone by the climate system. The formation and the type of clouds and rainfall remain uncertainties for researchers, especially regarding retroactions. “If we disrupt one element we will see a series of chain reactions so intertwined that we sometimes have a lot of difficulties to perceive the final impacts” indicates Helene Brogniez, researcher at LATMOS-IPSL on atmospheric climate variability. These are the aspects of the water cycle Helene Brogniez and her colleagues have studied in the tropic region to get further insight on the relation between clouds and atmospheric water content and the evolution of these links when surface temperature rise.

The case of the tropics

“The tropics have a way of being all-or-nothing” mentions Helene Brogniez. “In some regions with the monsoon it seems as if there are only two season − a rainy season and a dry season” she adds. Water resources is a major issue for the economy or agriculture: many things depend on the quantity and quality of water during the monsoon. This region thus shows a higher vulnerability than mid-latitudes on matters related to the water cycle and the formation of cloudy events, and their frequency and evolution regarding climate change. “Current tendencies seem to suggest that these regions evolve toward more intense rainfall but also stronger dry season, with quite high consequences on water availability and associated societal implications” she underlines.

The energy emitted at the surface of the Earth is blocked by clouds showing a strong vertical development and heats up the atmosphere. But when there are no clouds this radiation can get away. This is called radiative cooling and is significant in desert areas less likely to develop large convective clouds. Twenty years ago Richard Lindzen theorized the Iris hypothesis, suggesting that a rise in oceanic surface temperatures would induce a decrease of the surface covered by clouds associated to this deep convection, these great towers becoming more effective at generating rainfall. And this contraction of convective region reminds the shape of the Iris of an eye. “This analysis has been largely debated because the data manipulation was fairly questionable, but close working patterns are coming back in the last years and include the stability of the atmosphere and the altitude of convective clouds” specifies the researcher.

“We have then analysed the observations of our satellites to see if they contained this Iris behaviour and its variations, and what spatial and temporal scales were consistent with patterns discussed in the scientific literature” explains Helene Brogniez. Although it is rather difficult to confirm, their analysis seems to point that the rise in surface temperature implies a less heavy cloud coverage and a dryer atmosphere. The researcher insist that these points need to be further examined. Ideally, observations should be coupled with measures of associated radiation and quantity of rainfall for a better understanding of the impact on the radiative budget.

“This study gives some indications but observations were collected on a rather short time considering climate scales, so it raises questions on the representativity of these results” she highlights. This idea calls for a follow-up to see if climate models − especially the IPSL model − get the same tendencies when forcing a rise in surface temperatures. Incidentally, Helene Brogniez mentions a certain expectation of the IPCC report AR6 coming this summer regarding needs in climate modelling. “As scientists we can engage in so many different things to understand the climate system, but there are specific issues that needs to be addressed to improve climate models. One chapter of the IPCC report will focus on the water cycle and I think it will point to the major challenges on the water cycle that needs to be tackled in the coming years, especially concerning social impacts, as it is with the physic behind rainfall extreme events” concludes Helene Brogniez. 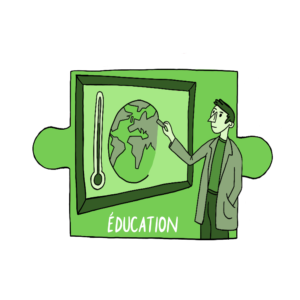 The challenge of a stress-free education on climate change